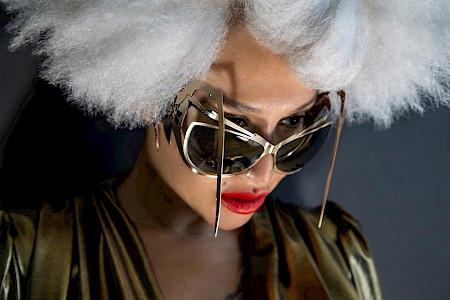 Following her incredible sold-out show at Band on the Wall, Lady Blackbird returns to Manchester to perform at the stunning surroundings of Manchester Cathedral.

“No place big enough for holding / All the tears you’re gonna cry / ’Cause your mama’s name was lonely / And your daddy’s name was pain / And they call you little sorrow / ’Cause you’ll never love again / Why you wanna fly blackbird / You ain’t ever gonna fly”
Blackbird (Nina Simone/Herbert Sacker, 1963)

Lady Blackbird didn’t mean to soundtrack a revolution. But last spring, that’s exactly what she did. On 27th May 2020 the Los Angeles-based singer Marley Munroe released her debut single.

“It’s a brave soul indeed who not only tackles one of Nina Simone’s starkest tunes, ‘Blackbird’, but also calls herself Lady Blackbird into the bargain,” noted Blues and Soul at the time.

“The original is a stripped-down chant with claps and hand drums, a field hollering protest song that will darken the skies of anyone’s heart. Lady blackbird has the same urgent grace as Simone and she really takes what is an essentially acapella song and adds her own powerful magic and spirit to proceedings… there’s an unmatched regality throughout, proving Lady Blackbird is an incisive and adroit singer. She channels the agony and thick despair on the lyrics, too.”

Simone released ‘Blackbird’ in 1963, at the height of the civil rights struggle. Almost six decades later, the killing of George Floyd, two days before the release of Lady Blackbird’s version, gave this new rendition a coincidental but no less stark, awful yet uplifting power.
“There was so much emotion there,” Lady Blackbird reflects now of a recording she and her Grammy-nominated producer Chris Seefried had laid down in the legendary studio III (aka Prince’s room) in LA’s Sunset Sound. Jazz, she agrees, has protest in its DNA.

“Ultimately, I’m in this to entertain, not to be any sort of leader. That’s a huge responsibility that’s so deep within itself. I want to entertain and push people’s buttons. But having that platform, having people willing to listen to you and your music, that’s a responsibility – and one of using that opportunity to share your views.”

As it happens, in fact they’d recorded ‘Blackbird’ a few months previously.
“And unfortunately and disgustingly, it did ring so true last spring,” she continues with a hint of the soulful fierceness that, on stage, makes Lady Blackbird a wonder to behold. “It’s always been one of my favourite songs of hers. I’d listen to ‘Blackbird’ on repeat on my headphones for hours at a time, just feeling it, getting into the bones of it. I could picture myself singing it onstage – I often do that, close my eyes and imagine me interpreting certain songs on stage. And I thought: this song has to be done.”

Lady Blackbird isn’t the Nina Simone of the Black Lives Matter era (she certainly wouldn’t call herself that). But she is the talent, and the force-of-nature, and the talk-walking personality, that Gilles Peterson has dubbed “the Grace Jones of jazz” – an accolade reinforced by the remixes of recent single ‘collage’ by jazz and house heavyweights Bruise, Greg Foat and KDA.

Its 11 tracks have a sound, feeling and attitude that speak of Lady Blackbird’s deep experiences in music, stretching all the way back to infancy.

This is Black Acid Soul. Are you ready to fly with Lady Blackbird?

Watch It Ain't That Easy (Official Video) by Lady Blackbird