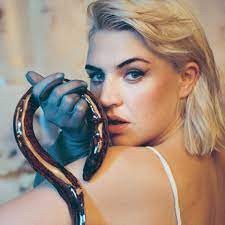 Self Esteem is an experimental-pop project, consisting solely of musician Rebecca Lucy Taylor.The inspiration for her stage name comes from the evolution of Taylor's confidence from her early 20s

Taylor was previously a member of folk duo Slow Club, which formed in Sheffield in 2006. The band consisted of multi-instrumentalists Charles Watson and Taylor, with Watson on the piano, Taylor on the drums, and both performing guitars and vocals.The band split up in 2017, following an extensive tour to support their last album, owing to differing musical interests.

Taylor released "Your Wife", her first single under the Self Esteem moniker, in 2017. Her debut album under the name, Compliments Please, was released on 1 March 2019 on Fiction Records.The album was preceded by the singles "Wrestling", "Rollout", "The Best" and "Girl Crush".

In April 2021, Taylor released "I Do This All The Time", the first single from her forthcoming second album as Self Esteem. In July she released the title track and announced that the record, Prioritise Pleasure, would coincide with a UK tour in October of the same year. The video for the single was filmed at the Almeida Theatre.

Taylor released her first single as Self Esteem on Kick + Clap, a label run by Django Django member Dave MacLean.Taylor then went on to feature on the Django Django track "Surface to Air", which appeared on the band's album Marble Skies.[citation needed]

She provided guest vocals for "Strangle of Anna," a song by fellow Sheffield act The Moonlandingz which appeared on their second album, Interplanetary Class Classics.Taylor also performed with the band live.