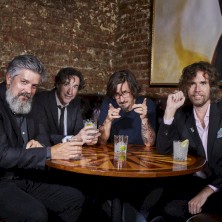 The Mountain Goats are an American band formed in Claremont, California, by singer-songwriter John Darnielle. The band is currently based in Durham, North Carolina. For many years, the sole member of the Mountain Goats was Darnielle, despite the plural moniker. Although he remains the core member of the band, he has worked with a variety of collaborators over time, including bassist and vocalist Peter Hughes, drummer Jon Wurster, multi-instrumentalist Matt Douglas, singer-songwriter Franklin Bruno, bassist and vocalist Rachel Ware, singer-songwriter/producer John Vanderslice, guitarist Kaki King, and multi-instrumentalist Annie Clark.

In March 2020, while the COVID-19 pandemic left the band unable to tour, Darnielle retrieved his old Panasonic RX-FT500 tape deck and recorded 10 new songs, using the direct-to-boombox method for the first time since 2002's All Hail West Texas. The resulting album, entitled Songs for Pierre Chuvin, was inspired by Darnielle's reading of Pierre Chuvin's 1990 book A Chronicle of the Last Pagans, and was released digitally on April 10, 2020, with a limited physical release on cassette through Merge Records.

The Mountain Goats announced in August 2020 that the band's nineteenth studio album, Getting Into Knives, would be released on October 23, 2020, on CD, vinyl, cassette, and digital.

In April 2021, the Mountain Goats announced their album Dark in Here to be released on June 25, alongside the release of its first single "Mobile". The album was recorded at FAME Studios.

For Tickets, Please go to:-