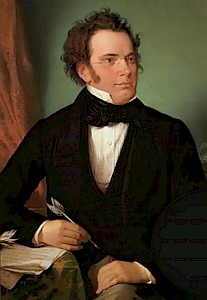 Winterreise (Winter Journey) is a song cycle for voice and piano by Franz Schubert (published as op. 89 in 1828). It is a setting of 24 poems by Wilhelm Müller and the second of Schubert's two great song cycles on Müller's poems, the earlier being Die schöne Müllerin (Op. 25, 1823).

Both were originally written for tenor voice but are frequently transposed to other vocal ranges, a precedent set by Schubert himself. The two works pose interpretative demands on listeners and performers due to their scale and structural coherence.

This evening Bass Lay Clerk James Berry will perform Winterreise in its entireity, accompanied by Christopher Stokes, Organist & Master of the Choristers, at the piano.