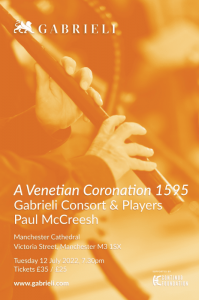 Gabrieli returns to Manchester, the city that saw the ensemble's first ever performance, to mark their 40th Anniversary.

A Venetian Coronation 1595 is a musical re-creation of the Coronation Mass for the Venetian Doge Marino Grimani, evoking the grand pageantry of what would have been a truly magnificent event.  Grimani’s love of ceremony and state festivals fuelled an extraordinary musical bounty during his reign and gave rise to the great musical riches of the period, especially the works of Giovanni Gabrieli.  With cornetts, sackbuts and an all-male vocal consort, Paul McCreesh fully exploits the dazzling polyphony of Andrea and Giovanni Gabrieli’s music, captivating the audience in a performance that is at once theatrical and ceremonial.

Gabrieli’s recording of A Venetian Coronation was one of the ensemble’s first great successes, in the early 1990s, and remains one of its most popular programmes. It established the ensemble as one of the foremost interpreters of music of this period and, perhaps most importantly, as a pioneering ensemble whose innovative use of liturgy brought repertoire to life in the context of the ceremony for which it was composed. In 2012, Gabrieli re-recorded this seminal programme for McCreesh’s own label, Winged Lion.