MANCHESTER 360º AT MANCHESTER CATHEDRAL -The Shapeshifters 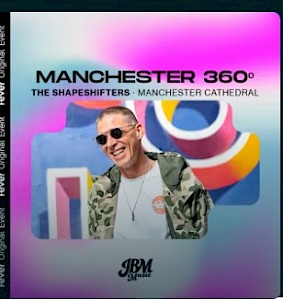 Manchester 360º is a series of unique and exclusive parties in jaw-dropping locations.

After its Paris debut and success in Geneva, 360º parties are finally taking over the British landscape starting with Manchester! From Cathedrals to Concorde planes, 360º parties offer you unique ways to experience unconventional locations throughout the globe!

The concept offers you a unique clubbing experience where 360 is brought to life with either epic 360 views or turning the club setting on its head as the DJ plays in the center of the room. And if that is not enough, prepare for partying to be taken to the next level with mesmerizing projection mapping and incredible hypnotic light shows.

Discover the biggest DJ’s from the electronic scene from a whole new angle as you take in astonishing surroundings. Party all night listening to your favorite electronic music, from techno and minimal to house and groovy..

The Shapeshifters have been signed to Defected Records since 2008. They are best known for their debut single 'Lola’s Theme' which went to No. 1 on the UK Singles Chart in July 2004. The duo has performed in some of the world’s best clubs including Hi Ibiza, Pacha and Space nightclubs before splitting in 2017. Marlin continues to produce and tour under the Shapeshifters name. Including a recent collaboration with Chic's lead singer Kimberly Davis for Glitterbox."