Manchester Lit and Phil - (Discussion for lively minds since 1781) In Conversation with Sathnam Sanghera, and distinguished historian, Dr Michael Taylor - Legacy of Empire - How Imperialism Has Shaped Modern Britain. 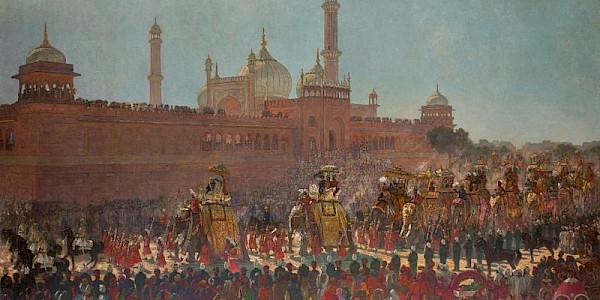 Legacy of Empire - How Imperialism Has Shaped Modern Britain

In what promises to be a memorable evening, we are privileged to have award-winning journalist and author Sathnam Sanghera discuss his best-selling book Empireland: How Imperialism Has Shaped Modern Britain (nominated for the 2021 Baillie Gifford Prize for Non-Fiction), in conversation with historian Dr Michael Taylor*.

In his brilliantly illuminating book, described as a “masterpiece", “deserving of mandatory reading in school courses” and a “scorching polemic on the afterburn of Empire”, the author proceeds to demonstrate how much of what we consider to be modern Britain is actually rooted in our imperial past.  In his conversation with the author, Dr Taylor will look to unravel the extent to which Empire has shaped our history, perception and understanding of the world.  He will seek answers to questions such as: How far does the history of the British Empire shape the lives and politics of British people today?  How should we remember the Empire, if we remember it at all?

In covering Sanghera’s experiences of growing up in Wolverhampton as the son of Punjabi Indians, exploring the role of Commonwealth immigrants in shaping modern Britain, and considering the legacies of some of the most traumatic incidents in imperial history, this conversation will seek to address some of the most pressing questions facing Britain today.  What should we do with the statues of slaveholders such as Edward Colston and imperialists such as Cecil Rhodes? Is it ‘woke’ to regard British imperial history with scepticism? How should we teach imperial history in schools and universities? And who is going to win the ongoing ‘culture wars’ about history and memory?

Sathnam Sanghera was born to Punjabi immigrant parents in Wolverhampton in 1976. He entered the education system unable to speak English but, after attending Wolverhampton Grammar School, he graduated from Christ’s College, Cambridge with a first class degree in English Language and Literature in 1998.

He has been shortlisted for the Costa Book Awards twice, for his memoir The Boy with the Topknot and his novel Marriage Material, and has also been shortlisted for, or won, the Desmond Elliott Prize, the John Llewellyn Rhys Prize, the PEN/Ackerley Prize and Mind Book of the Year. He has won numerous awards for his journalism, including Young Journalist of the Year at the British Press Awards in 2002, Media Commentator of the year in the 2015 Comment Awards, and the Edgar Wallace Trophy for Writing of the Highest Quality at the 2017 London Press Club Awards. He has also presented acclaimed TV and Radio documentaries.

In 2016 he was elected a Fellow of The Royal Society of Literature. His third book, Empireland: How Imperialism Shaped Modern Britain became an instant Sunday Times Bestseller on release in 2021, and has been longlisted for the Baillie Gifford Prize, the largest literary prize for non-fiction in Britain.

Dr Michael Taylor is an historian of the British Isles and the British Empire in the eighteenth and nineteenth centuries. He gained a double first and his PhD from Gonville & Caius College, Cambridge - for whom he also won University Challenge. His book The Interest: How the British Establishment Resisted the Abolition of Slavery was based on his PhD research, and was shortlisted for the 2021 Orwell Prize for Political Writing. He has written for the Guardian, the Literary Review, and the London Review of Books, as well as providing the introduction to a new edition of Olaudah Equiano's Interesting Narrative for Capstone Classics.

Did you know that members can book for free? Find out more: manlitphil.ac.uk/membership Opens in new window