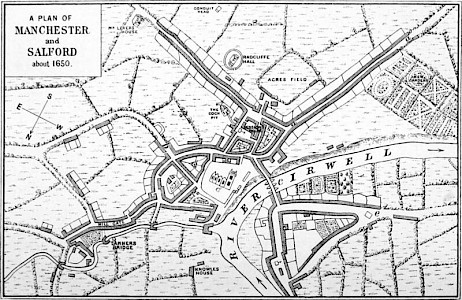 In the 17th Century Manchester was a peaceful, quiet and unexceptional market town. However, at this time, there was growing unease with the monarch, Charles I. By 1642, the people of Britain were beginning to take sides, joining the Parliamentarian, or Royalist, factions. Manchester declared for Parliament, whereas Salford declared for the King. Charles raised his royal standard in Nottingham on August 22nd, 1642.

This event is widely seen to mark the formal beginning of the English Civil War. Shortly afterwards, a Royalist force, led by James Stanley (Lord Strange, but later the Earl of Derby) laid siege to Manchester, in September 1642. Tim Cockitt’s lecture will include an account of the week-long siege of Manchester, which involved St. Mary’s Church (now the Cathedral) and what was Lord Strange’s town house (now Chetham’s Library and Music School).

Lord Strange was keen to collect the gunpowder and other arms stored in his town house. The siege was very much an amateur affair, with few experienced soldiers on either side. It did not help the attackers that it rained all week! “Bradshaw’s Defence of Manchester” is one of the famous murals in the Town Hall. The siege is also commemorated by a blue plaque at the site of Alport Lodge on Deansgate.

Tim Cockitt (MA) is a graduate of Oxford University. He is particularly interested in military history, and has visited numerous battlefields around the UK, Europe, and the USA. Tim is a keen member of the Battlefields Trust, which works to preserve battle sites around the UK. Tim has particularly strong interests in the English Civil War and WW1, and is the chair of the Manchester Military Society (MMHS).

Having gained early retirement from a career in computing in 2, Tim has been able to devote more time to his historical interests. During lockdown, Tim has provided a range of lectures of online lectures, hosted by groups such as "Zooming Through the Past", MMHS, MANCENT, and Subterranea Britannica. His experience in computing has proved useful in offering technical assistance for access to talks over the internet.

**Please note that booking closes at 17:30 on the day of the event, and we are not able to process registration requests after that time.  If you believe you have sent a registration request but have not received a confirmation email with joining instructions, then please contact the office as soon as possible.  Enquiries regarding bookings sent to the office after 17:30 on the day of the event may not be answered.**

Event image: map of Manchester and Salford c.1650 from 'The Great Civil War in Lancashire' (1642-1651), by Ernest Broxap, from The Project Gutenberg