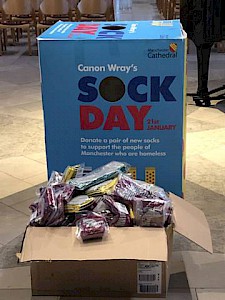 In December 2018, we launched the Canon Wray Sock Appeal in aid of the Booth Centre.

Canon Cecil Wray was a very popular, if slightly eccentric, priest who died in 1866 after serving in this church for 56 years. He was a contemporary of Joshua Brookes, and a rival to the claim of being the most prolific baptiser and ‘marrier’ in English history. Records show that he presided over 33,211 christenings, 13,196 marriages and 9996 funerals as a result of the massive growth in population during the Industrial Revolution.

Canon Wray was not afraid to speak his mind or get involved in Manchester’s political and social issues. He campaigned for new schools, the reduction of the working day to 10 hours for mill workers and was known for his sympathy for the needs of the poor.

Canon Wray’s ‘Birthday Gift’ is a fund he set up in 1866 for the provision of socks for the poor on the anniversary of his birthday. The response to this year's appeal has been fantastic and on 21 January, we were able to hand over 827 pairs of socks, 55 scarves, 41 hats, 37 pairs of gloves and other items of clothing. The donations will be distributed to those in need.

Thank you for supporting this appeal.