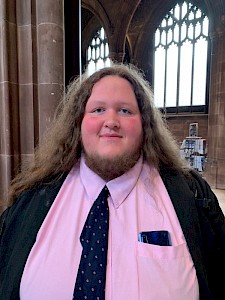 I was a student at Manchester Grammar School until 2017. It was during my time there that I discovered my love for music, in particular choral music and the organ. I started as a double bass player, later taking up piano, and then tuba. I focused as a first study tuba player for four years, doing lots of brass banding and orchestral playing. When I was 15, having never previously played the organ, I was asked to play organ for services in a local church. When I discovered the excitement and challenge of the organ and its wide-ranging repertoire, I immediately knew it was the right thing for me, and something that I wanted to get good at. My musical interests are broad, but I particularly enjoy playing early Baroque and Renaissance, as well as Romantic French Music, and I particularly enjoy listening to late Romantic orchestral music, such as the likes of Mahler and Richard Strauss.

Since leaving school in 2017, I have spent my time gaining experience in accompanying, directing and teaching, as well as being a church musician. In October 2020, I’ll be starting a degree in Chinese Studies at Cambridge University with the hope of continuing to do lots of music throughout my time at university. It is my great pleasure and honour to have been awarded the Sydney Nicholson Organ Scholarship at Manchester for this year. I am already settling in well and learning lots, and I look forward to all of what’s to come.