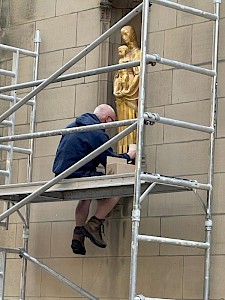 This gilded statue is set into the east wall, outside Manchester Cathedral. It shows the infant Christ in the arms of the Virgin Mary who is wearing a typical Lancashire mill worker's shawl as a reminder of Manchester's textile heritage.

The sculpture was created by Sir Charles Wheeler; it was installed in 1958.

Manchester Cathedral sits towards the northern side of downtown Manchester, an area that has seen extensive regeneration and development in recent years. From the outside, the cathedral appears to be a relatively modern church, typical of the Victorian era. However, the main body of the cathedral largely derives from the 15th century and the present structure retains elements that are almost 600 years old and has even survived a bomb blast during World War II. Although the structure has seen its share of changes, these have taken place over hundreds of years, unlike the rapid redevelopment of the Millennium Quarter surrounding it.

Until becoming a cathedral in 1847, it was a Collegiate Church; its full title is “The Cathedral and Collegiate Church of St Mary, St Denys and St George in Manchester”. Following the rapid expansion of Manchester during the Industrial Revolution, it was made a cathedral in 1847 and was extensively refaced, restored and extended in the Victorian period. All external stonework was replaced between 1850 and 1870 and the west tower was heightened in 1868. Consequently the cathedral gives the overall impression of a 19th-century structure. The cathedral also suffered a hit from a bomb in 1940, suffering the worst wartime damage of any UK cathedral apart from Coventry. Yet more restoration was needed after the IRA bomb of 1996 which exploded nearby.

The Lancashire Madonna was re-gilded in 2007 and because of the weather has to be re-gilded in July 2021. The gilding lasts for about fifteen years or so. It is a striking feature at the east end of the Cathedral and reminds us of the bond between Mary and her Son.